In September we had the pleasure of performing at Close House Hotel, Newcastle. We were greeted by a beautiful estate and fantastic weather and enjoyed performing some of our newest arrangements made especially for the occasion. As musicians we are too busy making music to explore such grand buildings as Close House, however, as with most estates of this size, its history is fascinating, and dates back almost 800 years to the thirteenth century. 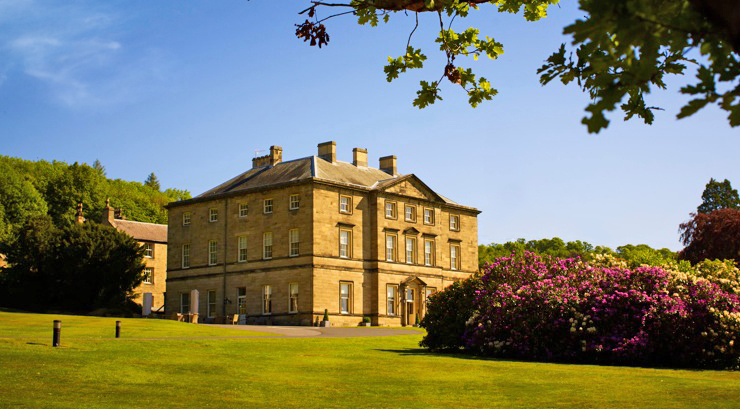 Close House, in its current form, was built in 1779 for the private use of the Bewicke family. The estate has its origin around a monastic house in the thirteenth and fourteenth centuries.
Owned by the Turpin family, the estate later past to the Read family, remaining in the family for several generations until 1626 at which point it was sold to Robert Bewicke. Robert Bewicke, a Merchant Venturer, was made Sheriff of Newcastle in 1615 and Mayor in 1628 and 1637.

In 1779 a new building was commissioned and the present Close House Mansion was built for Calverley and Mary Bewicke, replacing the old monastic house. The House was built in a Georgian style, with a balanced and symmetrical layout, including a large bay window in the ballroom, perfectly shaped to house a string quartet, the bay from which we accompanied the wedding ceremony.

It is thought that architect William Newton designed the house. Newton was responsible for the design of many buildings in Newcastle and the North East of England, including the Assembly Rooms, Newcastle, a wedding venue we have performed at many times.

Close House remained the residence of the Bewicke family for generations, extending into the early part of the twentieth century when property was mortgaged due to diminished wealth. The house was then occupied by the family of Sir James Knott and was apparently used as a Nursing Training College during World War II.

The Mansion and estate were sold at auction in 1953 and bought for the sum of £13,190, and later, in 1960, sold to Kings College, Newcastle, for the price of £19,500, a sum of money that today would fall short of a university education. Kings College, once part of Durham University, became the independent University of Newcastle upon Tyne in 1963. Newcastle University sold Close House in August 2004, a great shame, as I was to start study at the university a mere five years later, and Close House would, in my opinion, have made for an exquisite halls of residence.

Welcome to our website. If you are looking to hire a string quartet for your wedding or event please visit out booking page, browse our repertoire, and contact us to make arrangements. Also, look out for us at wedding fairs in your area.